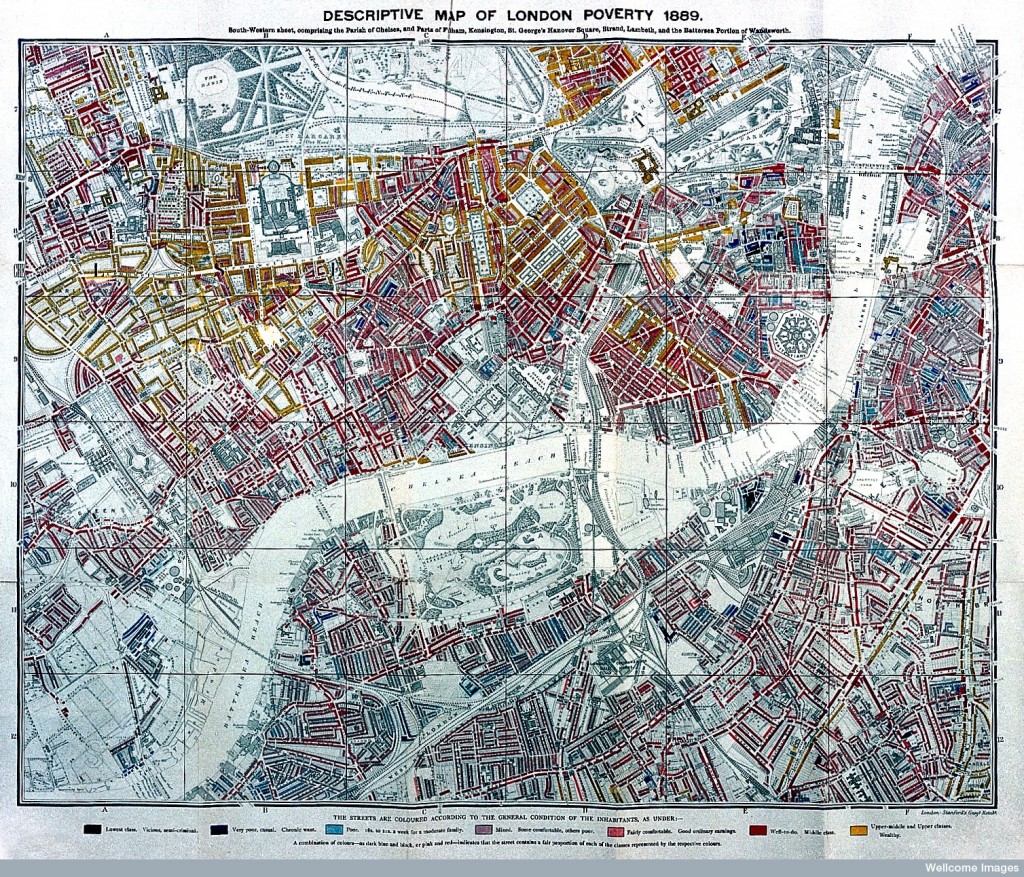 (Charles Booth, Life Labour and the People, is used under a CC-BY 4.0 License, with thanks to the Wellcome Library, London)

The Stress of the Urban was the focus of our first set of workshops, Mental Life in the Metropolis. The aim was to explore the question of urban mental health by revitalizing the conceptual and methodological links between urban sociology, psychiatry, epidemiology, geography and neuroscience – links that were once strong, but that have fallen off in recent decades.  Our goal for the overall project was two-fold: (1) to bring different forms of expertise together, and create space for a more ‘transdisciplinary’ understanding of the relationship between social life, mental health, and the brain in the city; (2) to use this platform to pose more general questions about the collaborative and intellectual relationships between the social and biomedical sciences.

Our workshops, in 2013 and 2014, aimed to begin the process of interdisciplinary conversation. Invited participants from epidemiology, sociology, geography, the psychiatric and brain sciences, and related fields, come together to re-imagine and re-activate an older shared interest in urban mental health – though a focus on contemporary empirical research and analysis. The plan was that the same cohort of invitees would, first, begin to re-establish lines of inquiry at Workshop 1, and, second, concretize these relationships in Workshop 2 – potentially building capacity to put together, for example, a shared publication, a network, even a grant proposal. Our third workshop did indeed develop such a proposal, which led to the research programme on Mental Health, Migration and the Megacity.

Workshop 1 took place on September 15th and 16th 2014, at the Museum of London. Because we were such a heterogeneous group, and we wanted this to be an experimental event, we asked participants to *not* give a typical talk at this workshop. Instead we asked everyone to address one question only: Is stress a useful concept in thinking about the relationship between urban experience, mental health and the brain?

We asked participants to centre their contribution around five shared readings. These are: Alison Abbot’s ‘Stress and the City: Urban Decay‘; Stephani Hatch and her colleagues’ ‘Importance of Thinking Locally for Mental Health: Data from Cross-Sectional Surveys Representing South East London and England; Suzi Hall’s ‘Narrating the City: Spaces of Urban Change in South London’; Heike Tost and Andreas Meyer-Lindenberg’s ‘Puzzling over Schizophrenia: Schizophrenia, Social Environment and the Brain’; and Ash Amin’s ‘The Good City.’

Of course, this was meant to be an experimental space, and we were not hugely prescriptive about this. If participants were willing to speculate quite freely, using only the materials in the pack, that was great; if they wanted to draw more heavily on their own empirical or conceptual work, that was fine too; if they decided to deliver a polemic, a proposal, or a performance – we were (mostly) okay with all of that. In any event, our goal was to create the space for a shared dialogue, and one in which everyone can participate, about how we might understand, think about, and do research on, the complex of relationships between stress, city life, mental health, and the brain. Contributions of any form that advances (or questions!) that goal was what we were looking for.